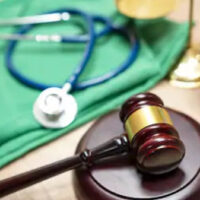 Many doctors get sued for medical malpractice once in their careers. It happens. But when a doctor has been sued not once, twice, or three times, but a whopping four times, there’s a serious issue that needs to be addressed by the state board.

Indeed, a plastic surgeon from Miami is facing his fourth lawsuit, which was filed in August 2021. The “Boob God,” as the doctor is commonly known, has allegedly left a patient with necrosis and sepsis due to his poor care.

The patient underwent a breast augmentation and abdominoplasty by Dr. Leonard “Lenny” Hochstein in 2019. The 55-year-old doctor is somewhat of a reality TV star, as he is married to Lisa Hochstein, who stars in the show “The Real Housewives of Miami.” According to the patient’s lawsuit, the famed surgeon and his team at Med Spa South Florida failed to meet the required standard of medical care, causing her procedures to get botched.

Just two days after the woman’s surgical procedures, she started experiencing complications. Her incisions turned purple and necrosis was setting in. She contacted the Med Spa multiple times, but her concerns were never addressed.

The woman, suffering from unbearable pain, checked into a local hospital. The doctor ultimately failed to preserve the patient’s blood supply, which led to tissue death. The patient lost her entire lower abdominal wall.

The woman had to undergo multiple additional procedures, including skin grafting, to fix the issue. She now claims to suffer from permanent disfigurement, scarring, mental anguish, psychological injury, embarrassment, and humiliation. She is asking for more than $30,000 in damages as well as a trial by jury.

The doctor has denied any wrongdoing and is asking to have the patient’s lawsuit dismissed due to various reasons, such as the expiration of the statute of limitations. This is the doctor’s fourth medical malpractice suit since 2019. In the first lawsuit, a patient sued him for “pain and suffering” that she suffered from her procedures. In June 2021, a patient sued the surgeon after she underwent a thigh and arm lift that left her with large wounds and limited mobility. In another lawsuit in August 2021, a patient claimed the doctor caused her to have “altered and deformed genitalia.”

The surgeon claims to take these allegations seriously, but has denied any wrongdoing in all four lawsuits. He blamed a surgical assistant in one case. All cases are still ongoing and none have been resolved as of yet.

Many doctors do not worry about medical malpractice, but accusations are a serious issue. Patients should feel comfortable with their doctors and not have to worry about mistakes with their health.

The Dade City & Zephyrhills medical malpractice attorneys at Mander Law Group have decades of experience with medical malpractice law. We will fight to get the best result possible in your case. To schedule a consultation, fill out the online form or call (800) 557-0411.