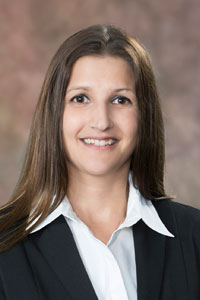 Christina LaMaida became a criminal attorney because she felt she could make the most impact in the criminal field. She started at the Pasco County Public Defender’s Office where she learned what it was truly like to defend those during their worst moments and let them know that someone will always be on their side. Working there taught her how to defend with a passion and she gained invaluable experience that others don’t have. During her tenure at the Public Defender’s Office, Ms. LaMaida had two Orders published in Florida Law Weekly, won Pasco County Attorney of the Year for the Public Defender’s Office and received an Award from the Criminal Law Section of the Florida Bar for the Most Improved Trial Advocacy at the State Attorney/Public Defender Conference.

Christina LaMaida attended Lock Haven University for her undergraduate degree where she majored in Political Science. After receiving many of the top grades in the department, she was asked to tutor for one of the department chairs, which she did for two years. In addition to her studies, Ms. LaMaida worked three jobs, held a scholarship and participated in a national sorority. After completing Lock Haven, she moved to Harrisburg, Pennsylvania where she started in sales and was able to perfect her negotiation tactics that became useful in today’s practice. She started her legal career in 2005 as a legal assistant in Harrisburg, Pennsylvania, ultimately working her way up to an associate attorney.

Ms. LaMaida graduated from Barry Law School where she was a night student and worked a full-time job at a law office. Not only was she successful in maintaining her job and receiving accolades in school, she was invited to the George C. Young Inns of Court, received a focus in Children and Families Concentration Program and completed an internship with the Juvenile Delinquency Law Clinic. Ms. LaMaida also volunteered for several different organizations including Guardian Ad Litem and GoodWill’s youth mentorship program. Due to the opportunities she had available to her in both undergraduate and law school, she was able to obtain skill and knowledge that exceeds all expectations.

Ms. LaMaida now uses her acquired skills and knowledge acquired to zealously defend individuals accused of crimes in the State of Florida.