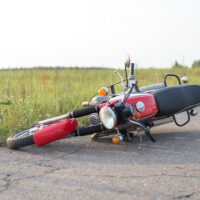 The Florida climate is perfect for motorcycles. The sun and warm weather make riding a fun activity. However, riding a motorcycle is not always safe.

A rider can lose control at any time. This was recently the case in Florida and it led to fatality.

The man was ejected from the motorcycle. He was then taken to a local hospital, where he later died. The crash is under investigation.

Loss of control is a common cause of motorcycle accidents. Even if a rider is being as safe as possible, accidents can happen in a blink of an eye. This is because motorcycles have two wheels, rather than four, so they are harder to control. In fact, motorcycles rely more on balance, so if a rider is inexperienced, it can be a lot harder for them to turn and go around curves properly.

That’s why speed is so dangerous for motorcycle riders. Speeding makes it harder to maneuver a motorcycle. Riders have a harder time avoiding hazards and other dangers in the road. While motorcycles are smaller and can squeeze into tight spots, a miscalculation can have deadly results.

A lack of experience is another factor. While motorcycles have somewhat of an advantage over passenger vehicles in that they have front and rear brakes, these brakes need to be used at the right times for best results. For example, brakes should not be used in the middle of a turn, as this can negatively impact the balance. Instead, the rider should slow down before turning and then accelerate through the turn. This helps the bike maintain its balance and the forward momentum needed to keep it upright.

Poor road maintenance can also be a factor. Potholes and uneven roads are especially dangerous for motorcycles and can easily lead to loss of control due to a lack of balance.

Hazards on the streets could also cause a motorcyclist to lose control. Animals such as deer can pop out onto the roadway. Also, debris, puddles, and ice can be hard for motorcyclists to easily avoid without causing a crash.

Motorcycle accidents can happen in a number of ways. Losing control is a common issue and an often deadly one.

The Dade City & Zephyrhills motorcycle accident attorneys at Madonna Law Group can help you with your motorcycle accident case. We’ll help you obtain compensation from the liable parties. Schedule a consultation by filling out the online form or calling (800) 557-0411.