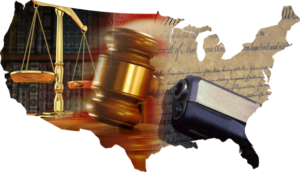 Contact a Dade City & Zephyrhills firearms offense attorney if you have been arrested for a firearm or gun offense. Prosecutors are increasingly seeking stiffer penalties for firearm offenses due to the demand for tougher penalties and pressure from anti-gun and gun control groups. A conviction for a firearms offense is a very serious offense in Florida with severe consequences. Retain the best firearms lawyer that you can afford. In many cases, we are successful in getting the charges reduced or dismissed.

Actual Possession and Constructive Possession—Don’t Incriminate Yourself with Statements

Florida’s 10/20/Life law makes Florida one of the toughest states in the United States on subjects convicted of certain firearms offenses. Florida’s 10-20-Life statute mandates minimum-mandatory prison sentences for possessing, discharging, or as a result of discharging causing death or great bodily harm.

Offenses that Qualify for 10/20/Life Sentencing under Florida Statute 775.087

The 10/20/Life statute states that a Defendant shall be sentenced to a minimum-mandatory prison sentence if convicted of committing or attempting to commit one of the offenses listed below and when committing the offense either possessed, discharged, or caused death or great bodily harm while discharging a firearm or destructive device. When serving a minimum-mandatory sentence the Defendant is not eligible for earning gain-time and must serve the sentence “day for day.” Also note that the judge has no discretion to depart downward and must impose the minimum-mandatory sentence. Retain the best attorney you can afford to defend your case. Remember, if you are not convicted of committing or attempting one of these offenses the 10/20/Life statute does not apply.

A person convicted of one of the offenses listed above (a.-q.) while discharging a firearm or destructive device must be sentenced to a minimum-mandatory prison sentence of 20 years. This provision in the statute applies to “warning shots.”
25 Years to Life Sentence for Causing Great Bodily Harm or Death after Discharging a Firearm

A person convicted of one of the offenses listed above (a.-q.) while discharging a firearm or destructive device and as a result of the discharge caused death or great bodily harm must receive a sentence consisting of a minimum-mandatory sentence of 25 years to LIFE in prison.
Your Right to Bear Arms in Florida and the United States—Protect Your Rights!

The Second Amendment to the United State Constitution addresses citizens’ rights to possess a firearm. It states that “A well-regulated militia, being necessary to the security of a free State, the right of the People to keep and bear arms, shall not be infringed.”

The Florida Constitution, Article I, Section 8, also addresses the rights of the People to bear arms. It states, “The right of the people to keep and bear arms in defense of themselves and of the lawful authority of the state shall not be infringed, except that the manner of bearing arms may be regulated by law.”

Call (352) 567-0411 today to speak with a Dade City & Zephyrhills firearms offenses attorney. Our firm is in Dade City, located in Pasco County, Florida. We are located directly across the street from the Pasco County Courthouse. The Madonna Law Group also represents clients involving criminal matters in but not limited to Hernando County, Sumter County, Citrus County, Hillsborough County, Polk County, and Pinellas County, including Tampa, Brooksville, New Port Richey, Clearwater, St. Petersburg, Lakeland, Bushnell, Bartow, and Plant City. We will defend you anywhere in the State of Florida.