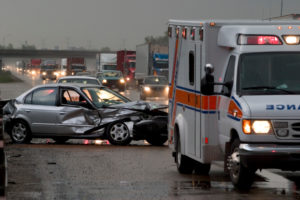 The charge of Driving Under the Influence with Serious Bodily Injury is a felony in Florida punishable up to 5 years incarceration in a Department of Corrections state prison. If you have been arrested for this charge, or believe you soon will be, you need to contact an experienced Dade City & Zephyrhills felony DUI attorney.

The Madonna Law Group in Dade City, FL has a DUI defense team consisting of experienced DUI attorneys, an investigator, legal researcher, and paralegals ready to assist you in maintaining your innocence and defending you in court.

When defending criminal allegations we believe that every detail matters. We aggressively represent clients throughout the Tampa Bay area including but not limited to Pasco County, Hillsborough County, Hernando County, Polk County, Pinellas County, and Sumter County. We will defend you anywhere in the State of Florida.

The criminal defense lawyers at the Madonna Law Group consisting of William Anderson are available today to start working on your defense. Call (352) 567-0411 today to schedule your free initial consultation.

Severe Penalties in Florida for DUI with Serious Bodily Injury

Crash Investigation by the Police in DUI with Serious Bodily Injury

After a traffic crash, in most cases, a law enforcement officer will attempt to get a statement from the driver during his/her DUI investigation. This conversation may take place at the scene, in an ambulance, in a police car, or at a hospital.

You have a right to not answer questions. You have the right to speak with an attorney before any questioning.

DUI Lawyers William Anderson can assist you in dealing with the police while the investigation is pending. Calling a DUI criminal defense attorney early in the case is highly recommended. We also recommend you saving our phone number in your phone now in the case the need for an attorney may arise.

Blood Withdrawals During the Investigation

If you are charged with DUI with Serious Bodily Injury the police may have taken blood from you at the scene, in an ambulance, police car, or hospital.

If you were rendered unconscious from the traffic crash and the police officer, deputy, or trooper believes he/she has probable cause that the crash resulted in serious bodily injury and you were driving under the influence, the law enforcement officer may have had withdrawn blood from your body while you were unconscious.

The DUI Attorneys at the Madonna Law Group will investigate the details of the blood withdrawal and attempt to suppress that evidence prior to the case going to trial. When evidence is suppressed, the odds that the State of Florida can successfully prosecute the matter decreases as the State’s case is not as strong as once believed. If that is the case, the prosecution may be more willing to negotiate a plea agreement acceptable to the defendant or dismiss the charge.

An experienced DUI attorney at the Madonna Law Group will evaluate the details of your case, conduct a thorough investigation and determine what defense strategy is best for your individual matter. This list contains some but not all potential defenses available to you at a hearing or trial.

If the police officer does not have probable cause that a crash resulted in Serious Bodily Injury and probable cause the driver is under the influence, any subsequent forced blood withdrawal may be ruled inadmissible.

Florida Statute 316.1933 addresses when a law enforcement officer has the right to use reasonable force to conduct a blood withdrawal from the defendant. The statute states that if a police officer has probable cause to believe that a person has driven or been in actual physical control while under the influence of alcoholic beverages, any chemical substances, or any controlled substance and caused serious bodily injury of a human being, the law enforcement officer shall require the person to submit to a test of the person’s blood for the purpose of determining the alcoholic content thereof or the presence of chemical substances or any substance controlled under chapter 893.

The law enforcement officer may use reasonable force if necessary to require such person to submit to the administration of the blood test. The blood test shall be performed in a reasonable manner. Notwithstanding Florida Statute 316.1932, the testing required by this paragraph need not be incidental to a lawful arrest of the person.

If charged with DUI with Serious Bodily Injury, a prosecutor employed by the State Attorney’s Office will prepare a Criminal Punishment Code Score Sheet and forward a copy to your criminal defense lawyer. This document is commonly referred to as the Score Sheet.

The Bottom of the Guidelines is the minimum amount of months in prison the circuit court judge can lawfully sentence you to unless the judge finds a lawful reason for a downward departure and is willing to go below guidelines. Downward departures are discussed below.

If you have been arrested, or you believe you will be, for Felony DUI with Serious Bodily Injury after an automobile accident, contact an experienced DUI attorney. Schedule a free case review with The Madonna Law Group.

The DUI criminal defense attorneys consisting of William Anderson are available today to start working on your defense.

The term “serious bodily injury” means an injury to any person, including the driver, which consists of a physical condition that creates a substantial risk of death, serious personal disfigurement, or protracted loss or impairment of the function of any bodily member or organ.