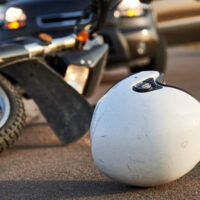 There are many causes of motorcycle accidents. Many crashes occur when vehicles make left turns in front of motorcycles.

This was what recently happened in Bradenton and unfortunately, it led to fatality. A 33-year-old man from Palmetto was recently killed in a crash while riding a Kawasaki motorcycle.

Motorcyclists are at risk of being involved in an accident when they are approaching an intersection and a vehicle turns left in front of them. In fact, it’s the top cause of motorcycle accidents and fatalities. Making a left turn at an intersection is much more dangerous than making a right turn. This is because drivers turning right do not have to cross oncoming traffic. During a left turn, however, motorcycle drivers have to be on high alert. They have to worry about oncoming traffic as well as their left to make sure nobody is trying to pass them.

One of the main reasons why motorists tend to make left turns in front of motorcycles is that they are hard to see. Motorcycles are much smaller than passenger vehicles, so they are much harder to see due to depth perception. Motorists don’t see motorcycles the same way they see cars and trucks. That’s because you may see hundreds of cars and trucks every day. How many motorcycles will you see? Probably fewer than 10. Motorcycles are not a huge part of the daily driving experience. Plus, they tend to blend in with their surroundings, so drivers have a much harder time seeing and judging them.

To make a safe left turn, motorists should:

No matter how careful you are, motorcycle accidents can still occur. If you have been injured, make sure you seek legal help.

The Dade City & Zephyrhills motorcycle accident attorneys at Mander Law Group can help you or your loved ones if they have been injured in a motorcycle accident. Schedule a consultation by filling out the online form or calling (800) 557-0411.