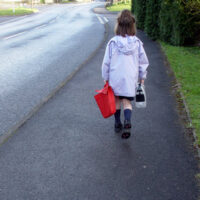 It’s important for children to be careful when out walking in Florida neighborhoods. When out at any time of the day, they can be approached by strangers wanting to hurt them or have them do things they don’t feel comfortable doing.

On December 28, an 11-year-old girl was approached by a 34-year-old man while walking in the vicinity of Northwest 10th Street and Northwest 35th Avenue in Gainesville. The man was in an SUV when he drove up to the girl and exposed himself to her. He also made lewd comments.

The girl ignored the man, but he followed her. When the girl got home, she told her mother. The man was arrested and is facing multiple criminal charges, including two counts of lewd and lascivious behavior, aggravated stalking of a child, and enticing a child. He is currently at the Alachua County Jail, with bond set at $125,000.

Lewd and Lascivious Offenses in Florida

Florida makes it a crime for adults to engage in sexual activity with those under the age of 16. This is true even if there is consent involved, so it is possible for a 19-year-old, for example, to be convicted of a sex crime for having a relationship with a 15-year-old. This is because under state law, a person cannot legally give consent to sexual activity if they have not yet reached 16 years of age.

A person in this situation could be charged with lewd and lascivious behavior. This term encompasses a variety of sex crimes, such as statutory rape, molestation, battery, exhibition, and conduct. Lewd and lascivious acts can be felony crimes in some cases. The penalties include fines and imprisonment. Sentencing is based on the ages of the victim and defendant at the time of the offense. For example, for the charge of molestation (which involves touching a minor’s genitals, chest, or buttocks), if the victim is under the age of 12 and the defendant is over the age of 18, it is a life felony, with a maximum of life in prison.

Other offenses are not punished as severely, but can be charged as first-degree or second-degree felonies and still result in 15-30 years in prison as well as fines of up to $10,000. Other factors include the type of sexual act and the defendant’s prior convictions.

Lewd and lascivious offenses are considered serious in Florida. It is possible for someone to receive up to life in prison as well as register as a sex offender for life.

If you have been accused of such a crime, count on the Dade City & Zephyrhills criminal attorneys at Madonna Law Group to help you get the best outcome. We’ll work hard to defend your case and get you the best outcome possible. To schedule a consultation, call our office at (800) 557-0411 or fill out the online form.