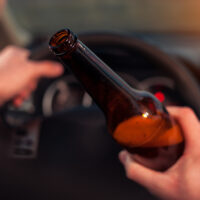 Drinking and driving is a serious crime, yet many motorists engage in it. It is not uncommon for police officers to arrest drivers for being under the influence of alcohol and drugs. These substances can affect one’s judgment and slow down reaction times. Being intoxicated while behind the wheel can cause people to do illegal things, like drive on the sidewalk.

This was the case for a Clearwater man, who was caught driving on the sidewalk by another motorist. The incident happened on October 12 on Gulf-to-Bay Boulevard in Clearwater. The 29-year-old man was driving on the sidewalk for a while. When he got to the Gulf-to-Bay and Belcher Road intersection, another driver noticed him. A few blocks later, he was stopped by police officers and arrested.

The man told police officers that he had never had a valid driver’s license in his life. He was booked in Pinellas County Jail, where he faces two charges – one for driving under the influence and one for driving without a valid license.

What Happens When You Get a DUI Without a Driver’s License?

When you get a DUI charge and you have a suspended driver’s license or no license at all, expect to face aggravated charges. This is because if you don’t have a valid license, then you were not supposed to be driving in the first place. Because you disobeyed the law on two accounts – you drove without a license and you drove while intoxicated – you will be punished more severely.

In some cases, getting a DUI while driving without a license can be considered reckless driving. While most DUIs are misdemeanors, your charge can be elevated to a felony simply because you did not have a valid license at the time. Even if you did not cause an accident while driving under the influence, you could face jail time, fines, probation and other penalties. Also, if this was not your first driving-related offense, the penalties get even stiffer.

This will make it harder to convince a judge or jury to reduce your charges or consider you innocent. After all, if you are willing to drink and drive without a driver’s license, what other driving violations have you committed? You may be prohibited from getting a driver’s license for five years or longer.

Driving while intoxicated and driving without a license are two separate crimes. Do not attempt to fight these charges on your own. The court will not look favorably at these offenses. Florida is strict when it comes to DUI offenses, so seek legal help right away to protect your rights.

Seek Help for Your DUI Charge

A DUI charge can result in numerous penalties, especially if you are caught driving without a license. The fines and penalties become more severe.

You need solid defense on your side to help you fight these aggravated charges. Let the aggressive Dade City & Zephyrhills DUI defense attorneys at Madonna Law Group help. We can assist you in obtaining a favorable outcome. Schedule a free consultation today by calling (800) 557-0411.