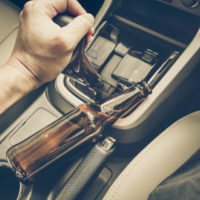 Every motorist knows not to drink and drive. However, many people enjoy a night out socializing and having fun with friends. This often leads to alcohol consumption, and some people tend to go overboard. One drink often leads to five, six or even 10. In a perfect world, a person would not drive afterward. This, unfortunately, does not always happen. Many people feel that they are OK to drive, causing serious accidents, injuries and even death.

Authorities responded to the man’s erratic driving after a customer at a McDonald’s drive-thru called police and told them that the man behind her was repeatedly bumping into her vehicle. When police arrived, they found the man behind the wheel with a bottle of alcohol next to him in a paper bag. Police claim that the man smelled of alcohol and claimed to be feeling “pretty good.”

The man continued to tell police that he only drank Jim Beam while at stoplights and stop signs.

Surprisingly, the man has never had a Florida driver’s license. He admitted to getting arrested for DUI twice while in Missouri. The man was arrested and face charges of driving without a license and driving while under the influence.

Even if your blood alcohol content (BAC) is above 0.08, all is not lost. The right lawyer can help you formulate a strong defense to reduce or even eliminate your charges altogether. Sometimes your rights are violated in the process of the DUI stop, so a lawyer knows how to protect your rights.

Common defenses for a DUI include improper stop, improper blood samples and a police officer not properly reading you your Miranda rights. Medical conditions such as balance issues and neurological conditions can also cause a person to fail a field sobriety test. Any violations of procedures, such as not properly calibrating the Breathalyzer, can also cause a BAC reading to be inadmissible.

Sometimes police officers will trick people into talking to them without a lawyer present. Do not talk to the officer. Make sure your lawyer is present.

It is possible to defend a DUI case. However, there are many factors that go into such a case, and each situation is different. If you have been arrested for DUI, it is important to seek legal help right away for the best possible outcome.

A DUI has serious consequences for one’s driver’s license. You must act quickly to protect it. Get help from the Dade City DUI defense attorneys at Mander Law Group. We can fight both your civil and criminal cases. Schedule a consultation by calling our office at (800) 557-0411 today.