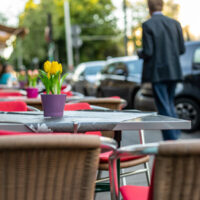 Imagine having a meal outside a restaurant when an out of control vehicle suddenly crashes into you. This may seem like a scene from a movie, but it recently happened in Miami. One person was killed and six others were injured in the accident.

The fatal crash happened on the evening of February 17 in the outdoor dining area of Call Me Gaby, an Italian restaurant located on Washington Avenue in Miami Beach. The incident occurred when a woman was attempting to parallel park her Bentley outside of the restaurant. Instead, she accelerated into the sidewalk cafe area and hit several tables.

Police officers and emergency responders arrived at the scene. Seven people were injured and taken to a local hospital. One victim later died. One victim was a 3-year-old child, who suffered minor cuts and bruises.

The driver of the Bentley remained at  the accident scene and is cooperating with investigators. Police are still investigating and recreating the scene using 3D forensic imaging to assess what happened before the crash. More investigation is needed, but police are under the impression that this was simply a horrific accident.

Vehicles crashing into restaurants, stores, and other buildings are more common occurrences than you may think. It is believed that at least five of these crashes happen on a daily basis in the United States. These accidents occur most frequently when a driver is entering or leaving a parking space next to the building. Even at these relatively low speeds, these crashes can be serious and even deadly, as seen in this case.

Statistics show that 70% of these accidents involve a restaurant, gas station, grocery store, or other place of business, such as a bank, gym, or car wash. More than 40% of these crashes involve pedal error, such as pressing the accelerator instead of the brake or from the driver’s foot slipping from one pedal to the other.

7-Eleven convenience stores tend to get hit hard, for some reason. More than 1,500 of these crashes have occurred at these stores. Many have been hit multiple times.

Drivers make mistakes. While cars have technology to prevent accidents, there’s only so much it can do. Protective devices such as posts, fences, walls, planters, and decorative benches have been used by store owners to protect customers. However, these options have not been fully tested, so it is unknown how well they work to prevent injuries and deaths.

Cars crashing into buildings and restaurants is a somewhat common occurrence. It’s easy for  drivers to make mistakes with the brakes, accelerator, and other car controls.

No matter how your car accident occurred, the Dade City & Zephyrhills auto accident attorneys at Mander Law Group can assist you. Get the compensation you deserve for your damages. Schedule a consultation today by filling out the online form or calling (800) 557-0411.