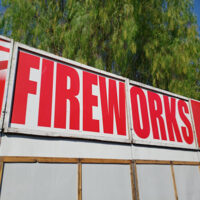 Drivers can be crazy. They crash into buildings due to pedal error, distracted driving, chain reaction crashes, and other incidents.

A recent collision involving a fireworks shop in Melbourne led to a literally explosive outcome.  A man was killed after his SUV crashed into the store. The fatal accident occurred on the afternoon of November 28 on West New Haven Avenue.

The crash happened near Interstate 95. The driver of an SUV rear-ended a Toyota Tacoma, forcing both vehicles into the parking lot of the Phantom Fireworks shop. The SUV kept coming straight into the store. The impact sparked a huge fire, which destroyed the entire  5,573-square-foot building. Rockets ignited, causing numerous explosions. There were numerous people in the area as the fireworks went off. Many witnesses saw the explosions, which reached distances of up to 100 yards.

The driver, a 53-year-old man, was killed in the crash. The driver of the Toyota was not injured. Two employees were inside the store at the time, but both were able to get out without getting injured.

The crash is still under investigation. Authorities are trying to determine the man’s condition before the accident.

Crashes involving buildings are becoming more and more common. It is almost as though they are happening on a daily basis. Well actually, they are, according to statistics. More than 100 of these accidents happen every day, on average. Drivers are constantly driving into stores, restaurants, and other businesses, but why?

Loss of control is also an issue. This sometimes happens after an initial accident. The man in this case had rear-ended a vehicle before crashing into the fireworks store.

Medical emergencies can also occur, but they are less common. Still, a driver may lose consciousness, suffer a seizure or a heart attack, choke on something, or experience some other medical issue that causes them to crash.

A police chase could also end with a vehicle crashing into a building. Again, this is not extremely common, but it does happen.

Crashes involving buildings are becoming more and more common. A fireworks building is an especially dangerous building to run into.

The Dade City & Zephyrhills auto accident attorneys from Madonna Law Group can help. We have numerous resources and decades of legal experience to help you pursue the maximum compensation possible for your damages. Schedule a consultation today by calling (800) 557-0411 or filling out the online form.