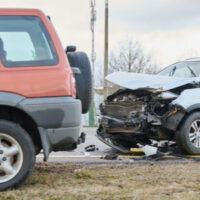 Car crashes can be deadly, especially when multiple vehicles are involved. Injuries can range from broken bones to head trauma to death.

One person was killed and another was seriously injured in a three-vehicle crash in Panama City. The fatal accident occurred on the afternoon of May 21 at Highway 231 and Highway 20.

A Jeep was traveling on southbound Highway 231, in front of a pickup truck. The Jeep tried to change lanes, but collided with the truck.

He said it appears the Jeep attempted to change lanes and didn’t see the white truck, which caused both vehicles to collide. The truck stopped in the turn lane. The driver of the Jeep lost control and came to rest in the median. A third vehicle was involved and it also went into the median to avoid a collision.

The Jeep also turned in a clockwise direction and overturned. Both the driver and passenger were ejected. One person was killed, while another was airlifted to a local hospital.

All northbound lanes were blocked. The crash is under investigation.

A multi-vehicle accident occurs when three or more vehicles are involved in a crash. These crashes typically occur on highways, where many vehicles are traveling close to each other at high speeds. When an accident happens, it’s hard for all these vehicles to stop, so they all become involved.

Crashes involving multiple vehicles are often deadly. There is not a lot of time to slow down or make other decisions. Sometimes drivers put on the brakes too late. They may also skid or swerve into adjacent lanes. They may also cause head-on crashes, which can cause even more vehicles to be involved.

The more vehicles involved, the harder it can be to determine liability. In fact, many claims involving multiple vehicles often have to go to court so that a judge can decide.

Just like all car accidents, evidence is needed. The person who has the least amount of evidence against them will often “win” the case and be awarded the most compensation.

However, each state has different negligence laws. Florida operates under pure comparative negligence law. This means that a person can recover damages based on their percentage of fault. For example, a person who can claim $100,000 but is 50% at fault will receive only $50,000. A person can claim compensation even if they are 99% at fault. However, the amount of money they will receive will be minimal.

Seek Help for Your Case

Car accidents can be fatal. Many others result in catastrophic injuries. No matter the situation, you may be left with a lot of expenses.

If you or a loved one has been injured or killed in a car accident, count on the Dade City & Zephyrhills auto accident attorneys at Mander Law Group to protect your legal rights. To schedule a consultation, fill out the online form or call (800) 557-0411.