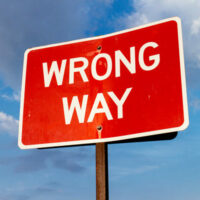 Drivers can avoid accidents on the roadways in many ways. One important thing drivers can do is travel in the right direction. When a vehicle is going the wrong way, it can collide head-on with another vehicle, causing a fatal crash.

Sadly, this recently happened in Miami-Dade County. A man driving in the wrong direction on Palmetto Expressway crashed into a vehicle with five occupants, all friends between the ages of 17 and 19. All five were killed in the crash, while the man survived.

The fatal accident happened on the morning of August 20 in Doral. A 30-year-old man was driving an Infiniti sedan in the wrong direction. He was heading east in the westbound lanes of the Palmetto Expressway when he collided head-on with a Honda sedan near Northwest 57 Avenue.

All five people in the Honda died at the accident scene. They were celebrating one of the occupants, an 18-year-old man, who was moving to New York to attend college.

The wrong-way driver was injured and taken to Jackson Memorial Hospital’s Ryder Trauma Center. The man was arrested on August 22 while still receiving medical care at the hospital. He was released from the hospital on August 26 and taken to Turner Guilford Knight Correctional Center.

So far, the man is facing five counts of vehicular homicide. However, he could face more criminal charges based on the results of a toxicology report.

Hundreds of people are killed in wrong-way accidents every year. While these crashes are uncommon, making up just 3% of motor vehicle accidents, they have a very high fatality rate. Those who survive often suffer from catastrophic injuries, such as broken bones, head injuries, brain damage, paralysis, spinal cord injuries, chest injuries, and internal injuries.

There are many causes of wrong-way driving, including:

Wrong-way crashes are often deadly, especially when high speeds are involved. It’s especially devastating when the wrong-way driver survives while the victims die.

If you or a loved one has been injured or killed in a crash, seek legal help from the Dade City & Zephyrhills auto accident attorneys at Mander Law Group. We’re prepared to deal with all the issues that may arise with your claim. To schedule a consultation, call (800) 557-0411 or fill out the online form.