7 Injured In Multi-Vehicle Crash In Sarasota 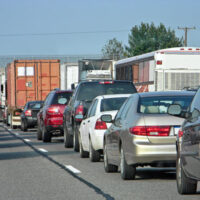 There’s a lot of semi truck traffic in Florida. It can be hard for these large vehicles to navigate through traffic when it’s at a standstill. If the truck driver fails to slow down in time, the vehicle can cause significant damage.

This is what recently happened in Sarasota. A semi truck plowed into traffic, damaging five other vehicles. Seven people were injured in the accident, but fortunately, nobody was killed.

The incident happened on the morning of July 11 on Interstate 75 South, near Clark Road. The semi truck ran into a line of vehicles that had stopped due to congestion. The truck slammed into a vehicle, and that vehicle then hit the vehicle in front, like a chain reaction. In total, five passenger vehicles were hit.

All southbound lanes were blocked due to the crash but had reopened in the afternoon. Motorists were diverted off the highway.

The truck driver in this case could not slow down in time, causing a serious accident. Speeding semi trucks are very dangerous. Although these drivers are on tight deadlines and are often in a hurry, they need to stick to the speed limit.

It’s easy to see why speed is a major cause of truck accidents. Thousands of truck drivers receive citations for speeding every year. Those who don’t get caught speeding often cause catastrophic and even fatal crashes because speed enhances the severity of these collisions.

When it comes to speed, there are a few other things to consider. First, it takes longer to slow down. The truck will need more time to stop to avoid a crash. A speeding truck driver may not be able to stop in time, which is what happened in this case, affecting multiple vehicles.

Another issue is that because of the truck’s size and center of gravity, the truck may roll over on a curve when speeding. Even a slight curve at a high speed can throw the truck off balance and cause it to roll over.

Semi trucks are large vehicles that can cause a lot of damage. It’s fortunate that there were no fatalities in this crash, given that six vehicles were involved.

The Dade City & Zephyrhills truck accident attorneys at Madonna Law Group can guide you after such a complex crash. We’ll help with liability and other matters. To schedule a consultation, fill out the online form or call (800) 557-0411.