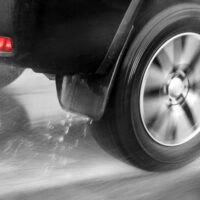 Hurricane Ian wreaked havoc on Florida. More than 30 people have been confirmed dead. Hundreds of thousands have lost power. The damage has been unbelievable.

Many residents are still trying to evacuate or get supplies. This has led to unsafe driving, with flood water from Hurricane Ian contributing to one recent crash in Putnam County. The fatal accident happened on the evening of September 29 on Cracker Swamp Road, near State Road 207, in East Palatka.

A sedan was heading east on Cracker Swamp Road when it traveled over standing water.  The driver lost control, causing the car to hydroplane onto the grass shoulder. The car then overturned and became submerged in a ditch filled with water from Hurricane Ian, which had just traveled through the area earlier that day.

There were two people inside the car: a 37-year-old man from San Mateo and a 30-year-old woman from Palatka. Both died at the accident scene. It is unknown who was driving. The case is still under investigation.

Drivers are often told to avoid driving in standing water due to the risk of hydroplaning, but what exactly is it? Hydroplaning occurs when water forms between your tires and the roadway. Because your vehicle is no longer in contact with the road and you have lost all traction, it becomes a dangerous situation. It can last for several seconds, which is enough to cause a serious crash. You are no longer in control of your vehicle and it is scary.

Besides getting new tires, there are a couple other things you can do to reduce the risk of hydroplaning. First, maintain proper tire pressure. Underinflated tires are more likely to hydroplane, while badly overinflated tires can reduce grip.

Another thing you can do is slow down on wet roads. Driving fast increases the rate at which your tires must pump water, so speeding can lead to hydroplaning. Take it slow when you’re near puddles.

It’s important to be careful when driving around standing water. You could hydroplane or submerge your vehicle, both which could cause a serious crash.

These types of crashes are common now that we’re in hurricane season. Understand your legal rights and protect yourself by contacting the Dade City & Zephyrhills auto accident attorneys at Madonna Law Group. Schedule a consultation by filling out the online form or calling (800) 557-0411.