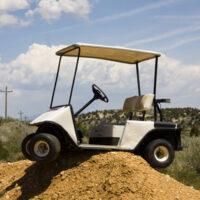 While felony DUIs are often handed out to those who cause serious injury or death, sometimes a person will be charged with one when they have a history of alcohol abuse and have not changed their ways.

A Florida CEO has been sentenced to four years in prison for felony DUI after driving under the influence in a golf cart two years ago. The 56-year-old man, the CEO of Flagler Golf Management, had begged for an inpatient treatment program instead, but his request was denied. He received the sentence on October 5.

The CEO also faces an insurance fraud charge not related to his DUI. Prosecutors offered him a prison sentence of two years followed by three years of probation for both the DUI and insurance fraud cases. However, he declined the offer.

A therapist testified as a witness, claiming that the man suffered from alcohol, cannabis, and cocaine use disorders, as well as PTSD. The man claimed he had a rough upbringing by a single mother but was doing better in life until his arrest. He talked about his family, which includes two adult children.

However, the fact remained that the man had an extensive criminal history. Back in 1993, he was convicted of robbery and related charges for stolen property. He was also convicted of DUI charges in 2003 and 2007, so the most recent golf cart DUI was not his first criminal charge related to alcohol use. In addition, the man was charged with driving with a suspended license in 2011 and was charged with boating under the influence in 2017. Even with various DUI charges on his criminal record, the man never sought treatment.

The man also contended that he was not driving the golf cart on the morning of July 24, 2019 when he received his latest DUI conviction. He was found hunched over the wheel of the golf cart in a construction zone on South Oceanshore Boulevard in Flagler Beach. He kept saying he was sorry and his speech was slurred. The man’s breath smelled of alcohol and he refused to provide a Breathalyzer sample. He also had stability issues and had trouble exiting the golf cart.

The jury convicted the man of felony DUI. The man was shocked at the verdict, but the judge thought that it was time for the man to serve a prison sentence, given that he received so many breaks in the past and has never sought treatment for his alcohol problem.

DUI cases are punished harshly, especially when someone has a criminal record, like the man in this case. When a person does not put in the effort to make changes in their life, the court looks at this negatively.

If you have been accused of a DUI, you need a solid defense. Get the right legal help on your side. The Dade City & Zephyrhills felony DUI attorneys at Madonna Law Group are ready to work on your case. We offer a initial consultation on DUI cases. Get started by calling (800) 557-0411 or filling out the online form.