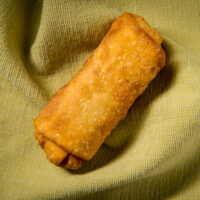 People often say crazy things to get out of tickets and crimes. A Florida woman recently told police that the reason she was driving erratically was that she had eaten an eggroll.

Was it true? Not quite. Police did not find any sign of an eggroll in the woman’s possession. Instead, they found loose pills and plastic baggies. The woman now faces DUI charges.

The incident happened in the early morning hours of November 14. An officer from the Pinellas County Sheriff’s Department pulled over the 45-year-old woman after she was seen swerving and driving dangerously. The woman was mumbling and slurring her words and had an odor of alcohol on her breath. The woman also could not follow simple instructions by the sheriff’s deputy.

The woman told the deputy her driving was caused by an eggroll, although no eggroll was found in the vehicle. Prescription drugs and controlled substances were found in the vehicle, though, and the woman did not have prescriptions for any of them. One of them was Tramadol, an opioid used for pain relief.

The woman later admitted that she had been drinking at her boyfriend’s house earlier. Police also believe she was under the influence of the pills found in her car.

The woman was arrested and charged with driving under the influence and possession of drugs without a prescription, both misdemeanors. She was also charged with possession of a controlled substance, a felony. The woman was originally booked into the Pinellas County Jail on a $2,000 bond. However, she was released later that day on her own recognizance. She has a criminal history that includes  violation of probation and disorderly conduct.

Being under the influence of an eggroll is not commonly recognized as a valid defense to DUI. However, there are some defenses you can use, such as the following:

Drinking and driving is not a joke. Denying it or blaming your erratic driving on something else is not funny, as your behavior can cause a deadly accident.

DUIs are often charged as misdemeanors, but they are not minor crimes. They are punished harshly and can lead to fines, license loss, and even jail time. Defend yourself with help from the Dade City & Zephyrhills DUI defense attorneys at Madonna Law Group. To schedule a consultation, call (800) 557-0411 or fill out the online form.