Florida Woman Falls Asleep at Wheel With Beer Can, Charged with DUI 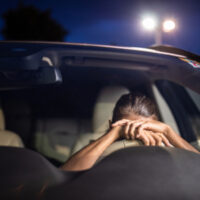 When a driver is accused of drinking and driving, they can sometimes prove that they are sober or below the legal limit. Defending yourself against a DUI charge, however, is very difficult when police see you in a vehicle with a beer can in your hand.

This was recently the situation that a Florida woman was in. The 35-year-old woman was arrested for DUI on the morning of January 17 after police found a suspicious vehicle parked in the middle of Highway 71 in Greenwood. The Dodge pickup truck had its engine running but it was not moving.

The woman was passed out behind the wheel of the pickup truck. She was also holding a beer can. Jackson County sheriff’s deputies woke up the sleeping woman, who then removed her foot from the brake. The vehicle started slowly rolling down the highway.

One deputy ran alongside the truck, beating on the window to get the woman to put the pickup in park. The truck almost landed in the ditch, but the woman corrected in time. She almost hit some mailboxes and a pole. The woman finally was able to stop the truck, allowing deputies to make contact with her.

The woman admitted to deputies that she had drunk a six-pack of beer the previous evening. She exited the truck and performed field sobriety tests. The deputies evaluated her and arrested her for DUI. She was taken to Jackson County Correctional Facility. She refused to provide breath samples and is now in the custody of the jail as she awaits her court appearance.

While it can be hard to defend yourself from a DUI charge when you are literally caught with alcohol in your hand, there are common defenses that most drivers can use when they are pulled over for possible intoxication. A good defense can reduce your charges and, in some cases, even eliminate them.

One common defense is an improper traffic stop. Police cannot simply pull over drivers for no apparent reason. They need to have reasonable suspicion that you were breaking the law. If you were driving properly, following all traffic laws and signs, your vehicle was properly functioning, and you were not speeding or swerving in and out of lanes, then police cannot legally stop you.

If police suspect you are drunk based on your actions, but you weren’t drinking, you can sometimes attribute it to a medical condition. Slurred speech can be a product of a neurological problem or even excessive tiredness. Allergies and sinus problems can cause red, watery eyes that may resemble those of someone who has been drinking alcohol.

There are many other defenses you can use for your DUI case. You need a lawyer who will aggressively represent your case.

Seek legal help from the Dade City & Zephyrhills DUI defense attorneys at Madonna Law Group. We will work hard to reduce your DUI charge or eliminate it altogether. Schedule a consultation today by calling (800) 557-0411 or filling out the online form.