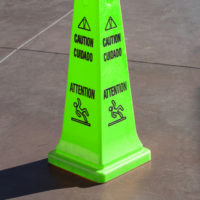 According to the Florida Record, an Orlando woman recently filed a slip and fall lawsuit against Walmart for injuries that she allegedly sustained after falling in one of their stores. Her complaint was filed in the 9th Judicial Circuit Court of Florida and claims that she was injured because of the store’s negligently maintained flooring. Specifically, she is claiming that she slipped and fell on a “transitory foreign substance” while visiting the company’s premises and is looking to hold Walmart responsible for failing to correct and/or replace the unreasonably dangerous flooring, and for failing to train its employees to regularly inspect the premises. The plaintiff (i.e. the injured woman who is suing) is requesting damages upwards of $15,000, plus interest and costs.

Let’s Take a Look at the Law

Slip and fall cases like this one are frequently covered in the media, but news outlets rarely report beyond the facts of the case. This often leaves the public with the mistaken belief that any person can sue for any injury that they sustain while on anyone else’s property. While it is true that an individual who was injured while visiting someone else’s property can file a personal injury lawsuit in order to recoup their losses under some circumstances, it is important to note that premises liability only exists in Florida if the landowner or occupier failed to keep their premises reasonably safe. In order to illustrate this point let’s take a look at the Florida statute that this particular slip and fall case is based on.

In Florida, premises liability for transitory foreign substances in a business establishment is established in section 768.0755 of the Florida Statutes. In order to recover damages under this code section the person who slipped and fell on a transitory foreign substance while in a business establishment must be able to prove that the establishment had actual or constructive knowledge of the dangerous condition that caused their fall and that the establishment should have taken action to remedy the dangerous condition. In these cases constructive knowledge may be proven by circumstantial evidence showing that:

Additionally, in order to prevail in court the injured plaintiff would also have to show that the defendant business establishment owed them a duty of care, that this duty of care was breached, that as a result of this breach the plaintiff was injured, and that their injuries are compensable.

Let Us Help You with Your Case

Premises liability personal injury cases can be complicated, but don’t let yourself get bogged down in legal technicalities. The bottom line is that if you were injured in Florida while on someone else’s property you may legally be entitled to collect compensation from the property owner or occupier if their failure to properly maintain the premises caused your injury. If you’d like to discuss the possibility of filing a personal injury claim in Florida contact the Madonna Law Group today. One of our experienced attorneys would be happy to discuss your legal options with you during a free initial consultation.