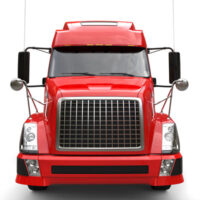 When it comes to auto accidents, nothing is as bad as getting hit by a semi truck. These vehicles are very heavy, sometimes weighing as much as 40 tons. Even when there are no trailers involved, the result could be serious or even fatal.

Sadly, this was recently the case in Florida. A pedestrian was hit and killed by a semi truck in Brevard County. The fatal accident occurred on the morning of February 17 at the intersection of  Peachtree Street and US 1 in Cocoa.

The pedestrian, a homeless man, was seen crossing the intersection when he was hit by a tractor-trailer cab. The driver briefly pulled over and the victim was in the road. But then a moment later, the truck was gone and the pedestrian was dead.

Police are still looking for the hit and run driver. After the crash, the truck was seen heading north on US 1. It is described as red, black, and brown with possible damage in the front.

The intersection where the crash occurred is considered to be very dangerous, especially due to nearby construction work causing traffic detours. There were allegedly other vehicles around when the crash happened and those drivers are encouraged to call the Cocoa Police Department with any information they may have.

All states have laws regarding what to do after a car accident. All motorists have a responsibility to stop and pull over after being involved in a crash in order to exchange information and render medical assistance, if needed. When they fail to do so, this is called a hit and run accident. A hit and run accident comes with various penalties, depending on the extent of the damage that has occurred. In Florida, these penalties include:

Florida sees a lot of truck traffic and these semi trucks can cause serious accidents. Many of these crashes are caused by driver errors and other forms of negligence.

Have you or a loved one been a victim? Count on the Dade City & Zephyrhills truck accident attorneys at Mander Law Group to guide you through the often complex process. We’ll work hard to investigate your case and gather as much evidence as possible. To schedule a consultation, call (800) 557-0411 or fill out the online form.