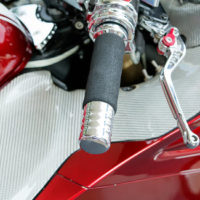 At approximately 3:00 a.m. on January 1st one of the first motorcycle accidents of 2017 occurred in Fort Lauderdale, Florida. The accident took place after two South Florida men decided that a motorcycle race was the perfect way to celebrate the beginning of a new year. Detectives believe the men lost control of their motorcycles before crashing into a wall. Both men were transported to the hospital and one later died of his injuries driving home the fact that the number of serious, often life-threatening, motorcycle accidents continue to plague Florida.

Approximately 50 percent of all motorcycle accidents in Florida involve only one vehicle and one operator. Motorcycle drivers who are operating their vehicle in inclement weather often lose control on slick roads and crash. Even during clear weather it is possible for a motorcycle to spin out of control during a sharp turn or on an unmaintained roadway. In 40 percent of single vehicle motorcycle accidents the driver is found to be under the influence of alcohol.

Distracted drivers and increased traffic have also been cited as reasons for the alarming rise in Florida motorcycle accidents. Drivers who are operating a motor vehicle while texting, navigating using a GPS, or speaking on their telephone are not focusing their full attention on driving. When a driver is distracted or otherwise impaired their chances of being in an accident increase. These drivers present a significant danger to motorcycle drivers who are more likely to be severely injured or killed in an accident with a larger vehicle.

Drivers who are paying attention still run the risk of inadvertently causing an accident with a motorcycle to occur. Motorcycles are significantly smaller than the average motor vehicle presenting a less noticeable profile. This smaller size makes it harder for drivers to notice and react to the presence of a motorcycle on the road. The majority of motorcycle accidents involving two cars occur when a motor vehicle makes a left turn directly in front of a motorcycle. When asked, drivers of the larger vehicle often state that they simply did not see the motorcycle coming.

If you or someone you love was involved in a motorcycle accident, the Madonna Law Group can help. Our attorneys can provide you with the assistance you need during this difficult time. With offices conveniently located in Dade City, we are able to provide you with a free consultation to discuss your unique situation. Call Madonna Law Group today at or 352-567-0411 (Dade City office) to schedule your appointment.