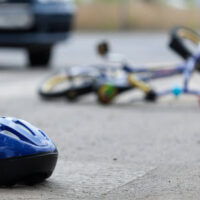 Many kids and teens ride their bikes on warm Florida days. While riding bikes can be a fun activity, it can also be a dangerous one, especially when motor vehicles are involved.

A 13-year-old girl is currently in critical condition after she was run over while riding her bike. The driver then fled the accident scene, but he is now in police custody. The crash occurred on August 16 in Sarasota.

The crash happened on East Bay Street, just across the street from Pine View School, where the girl is a student. The girl was riding her bike across the school crosswalk at the time when the driver, a 65-year-old man, failed to stop. He hit the girl and fled the accident scene.

The crash left a huge hole in the windshield as well as dents in the hood of the man’s Acura sedan. The girl suffered critical injuries after being thrown from the impact. She is being treated at All Children’s Hospital in St. Petersburg.

The man fled to Tampa in an attempt to get the vehicle quickly repaired. However, a woman spotted the vehicle, which looked like it had been in a crash. She took pictures of the car and license plate and called the Sarasota County Sheriff’s Office.

The man was taken to Sarasota County Jail, but he was later released on bond. The bond was set at $9,120. He is facing several criminal charges, including hit and run, fleeing an accident scene, and attempting to destroy evidence. The man will be in court on September 30. The Florida Highway Patrol is still investigating the hit and run crash.

Motorists who are involved in a car accident have a duty to remain at the accident scene. If they flee the scene before police arrive or before they exchange information with the other drivers, they can face punishment.

When the result is property damage, it is a second-degree misdemeanor that can result in up to 60 days in prison as well as a $500 fine. If there are injuries involved, it becomes a felony. The penalties include driver’s license revocation for three years, up to five years in prison, and a $5,000 fine. If the crash results in a fatality, then the charge is elevated to a first-degree felony.  The penalties include up to 30 years in prison, driver’s license revocation for three years, and a $10,000 fine.

After a car accident, everyone involved needs to remain at the accident scene. Hit and run crashes are penalized severely when someone is injured or killed.

If you have been injured in a crash, contact the Dade City & Zephyrhills auto accident attorneys at Madonna Law Group. Our experienced team will assess your case and ensure you get the compensation you deserve. Call (800) 557-0411 or fill out the online form to schedule a consultation.