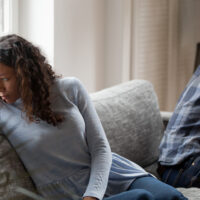 After walking down the aisle and saying “I do,” what were you thinking? Did you think about the plans you had for you and your spouse, such as going on vacation or having kids? Do you have dreams of moving and starting a new career?

A wedding means new beginnings, but in many cases, it also leads to unhappy endings. According to statistics, 50% of marriages end in divorce. But when exactly can one expect their marriage to end?

It can be hard to tell if a married couple will get divorced down the road or make it to the end. While there are some things to consider, the magic number appears to be seven, as in the seven-year itch. The average person is married for seven years before they get divorced.

But why seven years? The honeymoon phase lasts for about one year. Tensions start to rise after the couple is married for four years or so. By the time they have been married for seven years, tensions are at their highest. Either the couple fights for their marriage or they call it quits and end it.

While many may think that money is the biggest factor, the main factor is actually a lack of communication. Communication often leads to misunderstanding, which then causes contempt and resentment. This causes a downward spiral to the point where the couple can no longer effectively communicate. This leads to yelling, name-calling and other verbally abusive behavior.

People are also divorcing because they are living longer. They no longer want to be stuck in an unhappy marriage, even if there are children involved. Children grow up and leave, and sometimes couples realize that there’s nothing left holding them together. They’re nearing retirement and they want to enjoy whatever time they have left.

Infidelity is also a huge factor. Erectile dysfunction drugs are allowing men to have sex as they get older, and if their wives no longer want to be intimate with them, they’ll get sex elsewhere. This may sound cruel, but it’s the reality in many marriages. Once the spouse who has been cheated on finds out, the marriage is often over. It is hard to continue on with a marriage if you feel unattractive and can no longer trust your spouse.

While seven years is the average length of marriage before divorce, some marriages are much shorter. Some last decades or even the rest of a person’s life.

No matter when you decide to divorce, the Dade City & Zephyrhills divorce attorneys at Madonna Law Group will be there for you as you handle the stress and emotions. We offer compassionate legal help for our divorcing clients and will guide you through this complicated process. Schedule a consultation by calling (800) 557-0411.