Weirdest Things Couples Have Fought Over In A Divorce 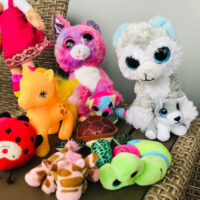 Divorce is hardly ever easy, especially when it comes to determining who gets what. While couples primarily argue over assets such as money, the house, the cars, and the children, sometimes they will fight over things that seem unimportant.

Toys, names, and even body parts have been the source of contention in some divorces. Read on to find out some of the weirdest things that couples have argued over during their divorces.

Beanie Babies are adorable toys stuffed with plastic pellets. These cuddly animals were the source of contention for one divorcing Nevada couple in 1999. Beanie Babies were so popular back then, and the couple had a collection worth as much as $5,000. So naturally, the two had a hard time splitting up the collection. The judge had enough and ordered the couple to bring the Beanie Babies into the courtroom, place them on the floor, and have them each pick one, one by one, until they were gone.

Christmas decorations are the pride and joy of many people who love the holidays, but would you spend $40,000 fighting over Christmas lights? One couple did. Apparently both parties cherished their chili pepper-shaped lights and fought tooth and nail over them, despite the fact that they had plenty of other assets to split up. The sentimental value was apparently huge here.

So many wives want to be rid of their ex-husband’s name after divorce. So why did one woman want to keep her ex’s name? Wouldn’t you if your husband was none other than famous rapper Dr. Dre? His wife, Nicole Young, has been fighting for partial ownership of Dr. Dre’s famous name, but so far, she hasn’t been successful. Her civil suit has been thrown out in court. The divorce has already been going on for over a year now, so we’ll have to wait and see what happens with the rapper’s name.

Things are really weird when a couple has to argue over one of the wife’s body parts, but there’s more to this story. A surgeon from New York gave his wife a kidney in 2001. She filed for divorce four years later. He demanded that his wife give him back the kidney or compensate him $1 million.

The court, however, found the demand ridiculous and threw it out. They claimed that the kidney and other human organs were not considered marital property and the man could not legally ask for it to be returned. The court warned the man that he would face punishment if he tried to recover his kidney.

Divorce makes people angry, bitter, and revengeful. They will often fight over things they don’t even care about out of spite—they want to anger the other party.

Divorces go more smoothly when a couple can agree and negotiate on their issues. The Dade City & Zephyrhills divorce attorneys at Mander Law Group can help you understand your legal rights and make things fair in your divorce. Call (800) 557-0411 or fill out the online form to schedule a consultation.