What’s The One Word To Avoid When Divorcing With Kids? 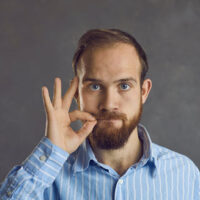 When going through a divorce, you need to be mindful of what you do during this time, especially if there are children involved. What you say or do can affect your kids for a long time. Events during the divorce could cause them to develop anxiety and depression. Badmouthing the other parent isn’t a good idea, either, as this could cause the children to think differently about that parent.

Child custody issues tend to get emotional. In many cases, parents will verbally attack each other to try to get the upper hand. So how do you reduce the tension and make the divorce process more amicable? By avoiding one important word.

The word to avoid is actually one that you’ll probably hear a lot during the divorce. Believe it or not, it’s “custody.” But why is “custody” such a bad word? Many lawyers talk about child custody like it’s no big deal.

It tends to encourage a battle between parents. “Custody” implies ownership, and it makes parents feel as if they are either a winner or loser—with the winner controlling the children. Even though joint custody is becoming more common, parents don’t often see it that way.

Another word that experts don’t like is “visitation.” It connotes a feeling of imprisonment (since inmates tend to get visitation with friends and family) and it makes it seem as though one person is the parent and the other is just a visitor. This may have been how custody matters worked decades ago, but nowadays, parents are overwhelmingly receiving 50/50 custody of their children.

Alternatives Words to Use

These terms reduce tension and help the parents focus on the needs of the children. They also make things easier in terms of figuring out where children will stay and what decisions need to be made.

This is a frustrating situation because the parents are usually in agreement on important decisions such as medical decisions and where the children should live.

When it comes to divorce, it’s always easier when the couple can work together, especially when children are involved. By avoiding certain words, you can diffuse arguments and focus on what’s important: the children.

If you’re struggling with child custody issues, the Dade City & Zephyrhills timesharing & parenting attorneys at Madonna Law Group can help. We have solutions to your divorce problems. Call (800) 557-0411 or fill out the online form to schedule a consultation.