One Injured in Garbage Truck Crash in Lauderhill 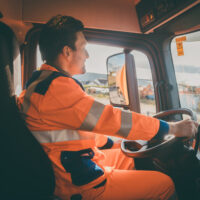 Garbage trucks are much larger than passenger vehicles. When the two collide, the results can be disastrous.

The driver of the car was trapped inside the vehicle. They had to be cut out by emergency crews. The driver suffered serious injuries and was taken to Broward Health Medical Center. The garbage truck sustained rear-end damage.

Garbage trucks are just as prone to crashes as any other vehicle. The main difference, though, is that the results can be much more serious. These vehicles are large, so navigating blind spots can be a challenge. Since garbage trucks have side-loading arms, a driver’s visibility is further reduced. It is hard for drivers to see behind the drivers’ window, to the right of truck, directly in front of the truck and the tailgate.

Compounding this issue even further is the fact that many garbage trucks have backup cameras installed. This is a huge problem in residential areas, where small children often play. Without a camera, a child is pretty much invisible to a garbage truck driver.

Keeping balanced is another issue of concern. Garbage trucks are top heavy, so they are prone to rollovers. Weather conditions also play a role.

In the event of a crash, garbage trucks, semi trucks and other large vehicles can cause serious injuries and even death. If you or a loved one is involved, make sure you get the help you need.

Truck accident cases can be complicated. The experienced Dade City & Zephyrhills truck accident attorneys at Mander Law Group can guide you through the process. Schedule a consultation by calling (800) 557-0411.