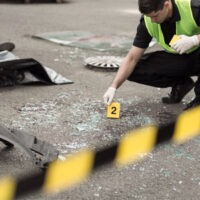 Car accidents often involve two or more vehicles, but that is not always the case. Sometimes just one vehicle is involved and the driver loses control, causing serious injuries and even death.

Sadly, this was the case for five young people in Doral. The five people were involved in a solo-vehicle crash on the Palmetto Expressway, near NW 58th Street. The crash occurred on the morning of March 8. Three people were killed and two others were injured in the fatal accident.

The crash happened when a Volkswagen lost control for unknown reasons and went off the road. It ended up on the grassy shoulder and hit several trees. Two people were ejected from the vehicle. They died in the crash. Another person was killed. Two others suffered serious injuries and were hospitalized.

The three people who were killed were identified as two women, ages 20 and 21, and a 21-year-old man. All victims are from Weston.

While operator error is the most common cause of all crashes, this is especially true for solo-vehicle accidents. In many of these crashes, vehicles go off the road and hit other objects, such as signs, poles and trees. In some cases, cars collide into buildings, such as stores and restaurants.

These accidents have a common theme: the driver loses control of the vehicle. This could be caused by various human factors, such as speeding, fatigue and intoxication. Sometimes the environment is to blame. Weather conditions, such as ice, snow and rain, could be a factor. The roadway could also be a factor. Narrow roads could cause a driver to lose control, as well as sharp curves and insufficient shoulders.

Solo-vehicle crashes are often deadly because while they involve just one vehicle, they tend to involve significant impact with another object. This is often head-on impact with a fixed object. The vehicle may fall several hundred feet down an embankment. In some cases, the vehicle rolls over.

If the driver dies in the crash, it can be difficult to determine the cause of the crash. Was it intoxication? Did an animal dart out in front of the vehicle/ Was the driver asleep or texting at the time? Was another vehicle involved, but it fled the scene? Investigators try their best to answer these questions, but in some cases, the cause is never determined.

Car accident cases can be complex. There are many factors involved and some crashes can be very serious. A person can suffer long-term injuries. Some even die.

If you or a loved one was injured or killed in a car crash, get help from the Dade City & Zephyrhills auto accident lawyers at Madonna Law Group. We will determine liability and aggressively fight for your rights. Don’t lose out on the compensation you deserve. To schedule a free consultation, call our office at (800) 557-0411 today.