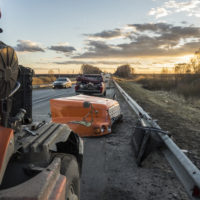 Interstate 75 is known for its large number of semi trucks. While these large vehicles deliver the goods we use on a daily basis, these trucks can be dangerous. They are 20 times larger than most passenger vehicles and are difficult to maneuver and slow down due to their size. One mistake from a truck driver or other motorist can lead to a fatal accident.

Unfortunately, this was the case in Florida on the afternoon January 3. Five vehicles were involved in a fiery crash on northbound Interstate 75, killing seven people and injuring eight others. Two semi trucks, a midsize sedan, a van and a fifth vehicle were all involved. The impact caused 50 gallons of diesel fuel to spill, causing a massive fire.

The crash was started by a semi truck and the sedan. The truck went through a guardrail, causing the vehicle to cross onto the southbound lanes of the highway. Another semi truck and a van also collided. The fifth vehicle sped through and possibly hit some of the victims. With diesel fuel leaking from the semi trucks, the collision looked like one huge fireball to witnesses.

The crash killed two truck drivers and five children, ranging in age from 8 to teen. The children were in the van. They were coming from a church in Louisiana and were on their way to Disney World. They had just one hour left of their 700-mile trip. Eight people were injured in the accident, many with critical injuries.

The accident occurred in a busy area of Interstate 75 that connects to Ohio, Michigan and Indiana. This area of the interstate is also busy with buses and vans shuttling tourists to various attractions around the Orlando and Tampa areas. The cause of the crash is unknown. The accident occurred on a straight stretch of road and the weather conditions were clear. An investigation could take months with the government shutdown.

All of the lanes on the interstate near Gainesville in Alachua County were closed through the night as police investigated and crews cleaned up debris. The accident had caused significant damage. Helicopters were also on the scene to look for victims in the woods near the highway.

This was the worst crash in the area in seven years. In January 2012, 11 people died in a chain reaction on Interstate 75. Heavy fog was to blame.

Semi trucks are large and can cause significant damage in an accident. While devastating, it is no surprise that this crash caused so many injuries and fatalities. Hopefully the victims and their families can recover adequate compensation for their losses.

Truck accidents are much different than car crashes. They involve many more elements and can be highly complex due to the complicated liability issues involved. Don’t handle such a case on your own. Seek help from the Dade City truck accident attorneys at Mander Law Group. Our aggressive lawyers are not afraid to fight for your rights. Schedule a free consultation today by calling (800) 557-0411.