Motorcycle Safety an Issue in Florida With Recent Fatal Crashes 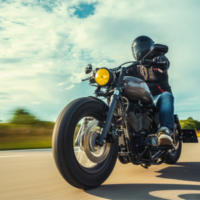 Motorcycles can be fun, but let’s not overlook their dangers. These small two-wheeled vehicles offer no protection for riders, unlike passenger vehicles. That means that even a seemingly minor motorcycle accident can become serious very quickly.

This has been true in Florida. In the past several weeks, five people have been killed and three others have been seriously injured in motorcycle accidents. This has left people concerned.

The latest crash happened on April 15 in San Marco. Two people were hospitalized after falling over the Acosta Expressway ramp. The man and woman were on the motorcycle riding on northbound I-95 when they failed to negotiate a curve while on the onramp. They hit a wall and fell 30 feet over the side. The 48-year-old man driving the motorcycle was critically injured, while the passenger, a 46-year-old woman, suffered serious injuries. Neither was wearing a helmet.

A day earlier, a car hit a motorcycle on northbound I-95. The 59-year-old man riding the motorcycle was killed. The 20-year-old driver was not injured.

On the morning of April 8, a Putnam County Corrections Captain was killed in a motorcycle crash. The man was riding on his motorcycle on northbound US-17 north when a van crossed in front of him. The two vehicles collided and the captain was ejected due to the impact. The 18-year-old vet died in the accident.

On April 6, a 31-year-old man was riding a motorcycle on Philips Highway when a pickup truck pulled out in front of him. The motorcycle rider died at the accident scene.

On April 3, a motorcyclist fell off his bike on University Boulevard West in Jacksonville. He was taken to a local hospital, where he later died. On April 1, a 61-year-old man from Palm Coast was riding his motorcycle on I-95 when he lost control and went off the side of the road. He died from his injuries. He was not wearing a helmet.

On March 23, a motorcycle and Jeep collided on Duval Road. The motorcyclist is in critical condition.

While some motorcycle riders are inexperienced or reckless, many accidents are caused by other motorists. Motorcycles are small and hard to see, which causes other drivers to pull out or turn in front of them. However, when a motorcycle collides with a passenger vehicle, it can be deadly.

Motorcycle crashes also occur when motorists fail to check their blind spots. Driving aggressively and following too close can also lead to accidents. Motorists need to learn to share the road with motorcycles and other vehicles.

Motorcycles accidents are especially serious matters because they often result in catastrophic injuries and even death. If you have been involved in one, make sure to seek legal help right away.

The Dade City & Zephyrhills motorcycle accident attorneys at Mander Law Group can help you with your case. We will aggressively fight for your rights to compensation. Schedule a free consultation by filling out the online form or calling (800) 557-0411.